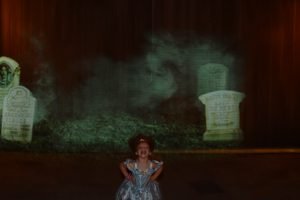 I had the pleasure of attending Disney’s Not-So-Scary Halloween Party last month on my trip to Walt Disney World.  I went on vacation with my two-year-old daughter and we had a blast.  Here are some tips and reviews of the festivities: 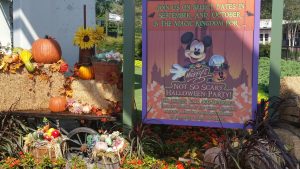 Dates: The Not-So-Scary Halloween Party takes place on select dates in September and October.  On Party dates, the park closes at 7PM for anyone who is not attending the party.

Place: The party is held at the Magic Kingdom.

Do I need a ticket? Yes  Is my ticket included with my park ticket?  The Not-So-Scary Halloween Party is NOT included in the price of your regular park ticket.  The price of the ticket gets more expensive the closer you get to Halloween.  I went the last week in September and I paid $75 and my daughter was free (children under 3 are free). In October tickets run between $91.00-$95.00.  I suggest purchasing your tickets in advance.  Some dates do get sold out.

It is Scary?  It’s Disney, so not it’s not scary.  The event is great for the whole family, both young and old.

Can you go on rides during the event? The rides at the Magic Kingdom are open during the event.  Since you need a special event ticket to attend the party, the park is less crowed.  Take advantage of shorter wait times at all the rides.  We couldn’t get a fast pass for Peter Pan that day (my daughter’s favorite ride), we were able to go on it twice during the event as the wait times was only 20 minutes as opposed to 50 minutes earlier that day.  Wait times are also less to see the princesses.  We waited 10 minutes to see Cindrella.

What is there to do at the Not-So-Scary Halloween Event?

Special Character Greetings:  This was one of the best parts of the Not-So-Scary Halloween Party.  They have characters to see that aren’t usually around.  The 7 Dwarfs, Jafar and Abu, Alice in Wonderland, Twiddle Dee and Twiddle Dum and the Queen of Hearts, Genie from Aladdin, Belle and Gaston, Cruella De Vil, Lots-o’-Huggin Bear, Buzz Lightyear, Captain Jack Sparrow and more.

Hocus Pocus Villain Spelltacular:  This was a fun show held at the front of the castle.  The Sanderson sisters from the Disney movie Hocus Pocus put on a great show.  In the show the sisters cast a spell on everyone at Magic Kingdom.

Happy HalloWishes Firework Show:  When Disney does a firework show, it’s a must see.  The Happy HalloWishes Firework Show does not disappoint.  The fireworks which are held over Cinderella’s Castle are a excellent.  It features songs by Disney Villains such as Ursula’s “Poor Unfortunate Souls”, “Oogie Boogie Song” from Nightmare Before Christmas, “Who’s Afraid of the Big Bad Wolf” from The Three Little Pigs, “Never Smile at a Crocodile” from Peter Pan, “Grim Grinning Ghosts” from the Hunted Mansion Ride, “The Skeleton Dance” and more.

Boo-to-You Halloween Parade:  We just love seeing parades at Disney, they are always entertaining.  This parade was excellent.  Make sure you line up early to get a good view.  The parades features the Headless Horseman and Disney characters dress in their Halloween costumes.  This is a must see while at the Halloween Party.  The parades lasts about 20 minutes.

Monster Mash Party: This was my daughter’s favorite part of the event.  There is a DJ that plays music, while you can dance with your children with the monsters from Monsters Inc.  This is a must do at the event.

Trick-or-Treating: Kids can trick-or-treat throughout the park.  The trick-or-treat stations can be found on the special not-so-scary Halloween party map located at the front of the park or on the My Disney Experience App (I highly recommend that you download this app, when planning your Disney vacation).  Kids get a whole handful of candy at each station.  Since my daughter is only two, we stopped at only a couple of trick-or-treat stations as I didn’t want her to have a lot of candy.

What do people wear at the No-So-Scary Halloween Event?  The Not-So-Scary Halloween Party is a costume event.  At the event all the children were dressed in their Halloween costumes. Adults can get in on the fun as well and dress up.  There are some rules to wearing costumes: Children under 14 can wear masks as long as they do not cover the entire face. Costumes with weapons, sharp objects or anything that can be used to strike another person are not permitted.   People over the age of 14 cannot wear masks, the costumes have to be appropriate, non violent and cannot be offensive to others.  If you plan on wearing a cape the cape cannot hang below the waist, no costumes that drag on the floor.  Remember it’s a not-so-scary Halloween party, you can not wear anything that would scare a small child.  If you have a question about a costume you want to wear visit the Disney Parks website for more information.