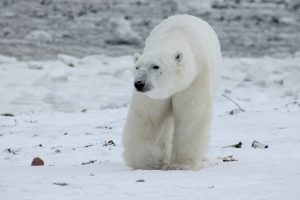 What is a Polar Bear?

Adult polar bears are mostly solitary animals except during mating meaning they spend most of their time alone.

A polar bear’s skin is black.  Their back skin helps keep them warm because black absorbs more heat from the sun than any other color.  If their skin is black then their coat/fur must be white right?  Actually no, their coat/fur is transparent (clear). So, if their skin is black and their fur/coat is clear, what makes them look white?  Their fur looks white because it reflects light from the snow.  A polar bear’s coat/fur is oily and water repellent.  This makes it easy for them to shake off the water and ice.

Under their coat/fur is a layer of blubber that is about 4 inches thick.  The blubber keeps the polar bear warm.

Polar bears have two small ears on the sides of their head.  Their ears are small so they will let out less heat.  Because polar bears live in such cold climates, their body was designed to keep them warm.

Polar bears have an excellent sense of sight.  They can see well in the day and at night.

A polar bear had a black nose just above their mouth.  They have an excellent sense of smell. They can smell seals from miles away.

Polar bears have a large mouth with sharp teeth. They have 42 teeth. That they use to hunt, kill and eat prey.

Polar bears have four feet/paws.  The bottom of their feet/paws is covered with fur and rough pads  The fur and pads help prevent polar bears from slipping on the ice. An adult male feet/paw can be up to 12 inches wide and 18 inches long.   Polar bears also have very sharp claws. They use their claws to grab their prey.  Their toes are partially webbed to help them swim.

All Polar Bears are left-handed!

Polar bears are mainly solitary animals and usually, stay to themselves.  When they interact with other polar bears or other animals they growl, hiss and show their teeth when angry.

Polar bears are also excellent swimmers.  They can swim 6 miles per hour!  Polar bears can hold their breath for over one minute.

They can also swim a hundred miles without stopping! Polar Bears have been spotted in the Arctic waters 200 miles away from land!

Even though Polar Bears can swim long distances they usually stay closer to land because it takes a lot of energy to swim far away.

Polar bears are not only great swimmers but they can run fast too.  Polar Bears can run 30 miles per hour for short distances!

What does a Polar Bear Eat?

Polar bears will stalk their prey on the ice. They will slide across the ice on their belly to sneak up in the seals.

Polar bears don’t usually eat all of the food they catch.  They often just eat the intestines and the blubber under the skin.  The leftovers become food for ivory gulls and arctic foxes.

Polar bears will sometimes eat seaweed that has washed up onshore.

Where Do Polar Bears Live?

Besides Polar Bears, very few animals can live in the cold, harm climate of the Arctic.  Some of these animals include Arctic fox, walruses, Narwhals, some whales, and Arctic Terns.

Polar Bears can live about 25 years old in the wild.

A mother Polar Bear is pregnant for 8 months. Polar bears have babies in the winter.  When she is ready to give birth she digs a den in a snowdrift. She will spend a couple of weeks alone in the den before giving birth.

A mother gives birth to 1-4 cubs. The cubs are around 1 pound when they are born. Cubs are born blind, deaf and completely dependent on their mother. They will be able to hear in a little less than a month.  They will open their eyes in a little more than a month. The mother polar bear will stay with her cubs in the den throughout the winter. It is warmer in the den then outside but it’s still really cold, below freezing.  To keep her cubs warm, the mother polar bear will cuddle up next to her cubs.  She also feeds them her milk.  The polar bear’s milk is full of fat which also helps keep the cubs warm. During this time the mother polar bear does not eat.  She lives off of the stored fat from summer eating all winter.

In the Spring are March the mother polar bear is ready to come out of her den.  She checks to make sure the surroundings are safe, then she and her cubs will come out.  This will be the first time the cubs have ever been out of their den.  The cubs will play in the snow and get to know their surroundings.

Mother polar bears take very good care of their cubs. She will protect them against predators.  The number one predator to a cub is an adult male polar bear.

Cubs stay with their mother for about 2 years. During the two years, the mother polar bear will teach her cubs how to hunt, dig dens and protect themselves. Sometimes cubs die shortly after leaving their mother from starvation.

There are three main facts that are a threat to polar bears: hunting, poaching (illegal hunting) and loss of habitat.

The only predator of a Polar Bear is a man.  Polar bears were hunted for their fur.  Their fur is waterproof and warm which makes it great for people living in cold environments.  Today most governments have outlawed polar bear hunting in efforts to save this animal.

Global warming affects Polar Bears.  The Arctic ice is melting. The ice is a Polar Bear’s home and hunting ground.  Without it, they cannot survive.

Drilling or oil can cause pollution that harms polar bears.  The winds can carry toxins into the air and in polar bear territories.

Today there are many organizations that research polar bears and who are also helping to save their habitat.