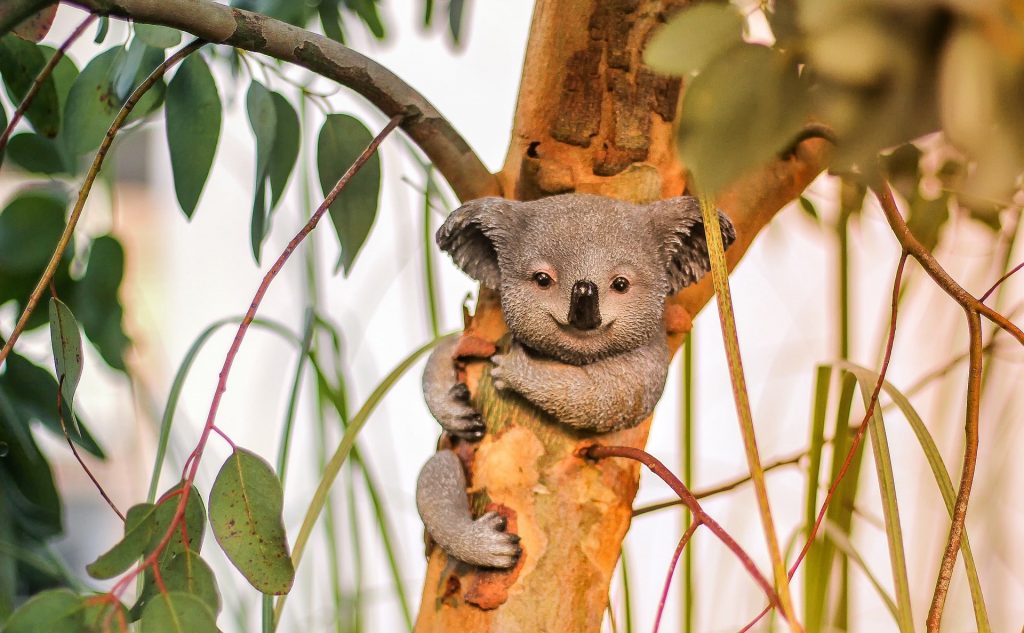 What is a Koala?

When thinking about Koalas we think of the word bear,  but did you know that a koala isn’t a bear at all?  They are marsupials.  A marsupial is an animal with a pouch.

There are three Koala subspecies: Northern, Intermediate, and Southern.

Koalas are often referred to as bears because of their appearance.  They have grey furry bodies with big heads, large circle-shaped ears, small black eyes, and a black nose.  They have white fur on their ears and chest.  A Koala’s fur looks smooth but it is actually coarse.

Koalas have two arms and two legs.   Koalas have 2 thumbs on each of their front claws.  They are marsupials.  Their pouch is located toward the bottom of their bodies and opens out. Koalas keep their newborn babies in their pouch.  Males do not have pouches.

Koalas are small animals, they weigh between 15-30 pounds and are 2-3 feet tall.

Where do Koalas live?

Koala habitats are located in forests and woodlands. Koalas are arboreal meaning they spend most of their time in trees.

What do Koalas eat?

Koalas are herbivores meaning they don’t eat meat. They only eat the leaves of eucalyptus trees. Koalas have sharp teeth that they use for chewing leaves.

The leaves of the eucalyptus trees lack nutrition to give koalas energy.  Because koalas have little energy they spend 18-20 hours a day sleeping!

Koalas rarely drink water.  They get their water from eating eucalyptus leaves.

Koalas are nocturnal meaning they sleep during the day and are awake at night.

The life expectancy of a koala is between 13-18 years

Koalas do not live in groups.  They prefer to spend their time alone.

The main predator of a Koala is human. Human’s cut down the trees where the Koala lives causing them to lose their habitat.

A mother Koala is pregnant for about 35 days. A baby Koala is called a joey or cub

Baby Koalas are born blind, earless, and hairless.  They are completely dependent on their mothers.

A baby Koala is the size of a jelly bean when it is born and makes their way to their mother’s pouch all by themselves.

For the first six months, the baby Koala will stay hidden in the mother’s pouch. During that time their hair will grow and eyes and ears will develop.  They will get nutrition by drinking their mother’s milk.

At around 22 weeks old the baby Koala will eat their mother’s pap(a soft poop) this gives them the bacteria necessary for them to digest the eucalyptus leaves.

When the koala reaches 30 weeks the baby Koala will begin to eat eucalyptus leaves.

At 12 months old the baby Koala will leave their mothers to find their own place to live.