Are you a kid that wants to learn more about African Elephants and Asian Elephants?  Did you know that elephants are the largest land animal in the entire animal kingdom?  Do you want to learn about how big they are or how much they eat?  We have the best elephant facts for kids right here.  Keep reading for more information on the large land animals. 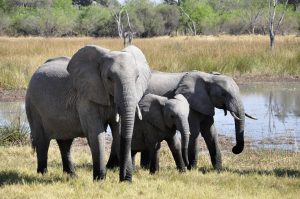 What is an Elephant?

Elephants are the world’s largest land mammal.  A mammal is a species that is born and not hatched from an egg. Mammals have lungs that breathe air.  When a female mammal gives birth, their bodies produce milk to feed their babies.  Humans are also mammals.

A well-known prehistoric ancestor to the elephant is a woolly mammoth.

African Elephants live in forests, savannas, grasslands throughout Africa. African Elephants that live in the savannas are referred to as Savannah Elephants.  They live in Sub Saharan areas of South and Eastern countries of Africa including Botswana, Kenya, Tanzania, South African, and Zimbabwe.

The African Savannah Elephant sometimes called the bush elephant is the largest type of elephant.

African Elephants that live in rainforests in both South Africa and West Africa are referred to as Forest Elephants.

Asian elephants are sometimes divided into four sub-species the Indian, Sir Lankan, Sumatran, and the baby-faced pygmy elephants of Borneo.

African elephants are larger than Asian Elephants.  They also have longer trunks and legs and bigger ears.

An elephant has a large body with a head, four legs, tail, trunk, and tusks.  Their skin is very thick and has a rough feel to it.

Elephants have large ears and excellent hearing.  Scientists believe by waving their ears helps them stay cool.  Elephants also use their ears to express emotion.  They will flap their ears when greeting other elephants or are happy.  They will push them out and make them look when they feel they are in danger.

Elephants are gray in color.

Elephants grow long teeth, these are called tusks. Tusks never stop growing.  Male African Elephants can grow tusks as long as 8ft.  Elephant tusks are made out of ivory. Elephants don’t have any natural predators, but, humans have been known to kill elephants for their ivory tusks.  It is illegal to kill elephants for their ivory, however, poachers are still killing elephants and selling their ivory on the black market.  Poaching is when an animal is killed illegally.

What is an Elephant’s Trunk Used for?

Elephants are well-known for their large trunk. The trunk can be described as a blending of the nose and the elephant’s upper lip.  An Elephant trunk is made to move in many ways.  This helps elephants use their trunk in many different ways.

Eat – Elephants use their trunk to get food and put in their mouth.

Drink- Elephants use their trunk to suck up water after they suck up the water, they squirt the water in their mouth.

Bathe-  Elephants also use their trunk to suck up water and spray it over their body to get clean.

Smell- An elephant’s trunk is their nose. Elephants use their trunk to smell objects in front of them.

Play- An elephant uses its trunk to greet each other and play.

Attention– Baby calves will raise their trunk to get attention from their mothers and other elephants.

Greetings- Elephants will sometimes greet each other by putting their tusks in each other’s mouths.

An elephant’s trunk is not only useful but it’s also very strong.  Their trunk has about 50,000  muscles and no bones.  The trunk is strong enough to lift and move trees out of the way! Adult elephants can lift up to 550 pounds using their trunks.

Elephants are around 200 pounds when they are born.  That’s one big baby!

An adult Asian male elephant can grow to be 8-10 feet tall and weight 2-5 tons.

Female elephants are smaller than males and weigh less.

What Does an Elephant Eat?

Elephants are herbivores meaning they only eat plants and vegetables.  They do not eat meat.  Elephants like to eat berries other fruit, roots, bark, grass, and leaves.

An adult elephant can spend 16 hours of their day eating.  An adult elephant eats between 300-600 pounds of food every day. How do they eat all that food?  An elephant has four large teeth that they slide back and forth to chew their food.  All that chewing wears on elephant teeth.  They grow new teeth to replace the old ones.  Elephants can go through six sets of teeth in their lifetime.

Since elephants spend so much of their day eating, they spend a lot of time pooping too.  An elephant can poop 12-15 times a day all that poop can add up to 300 pounds a day!

Eating all that food can make an elephant thirsty.  Elephants can drink between 40-50 gallons of water every day.  Elephants dig up the ground in search of water.

Elephants travel in herds.  A herd is like a family unit and is made up of 8 to 30  elephants.  Elephant herds are led by females. The leader of the herd is called a matriarch.  The matriarch is the oldest female in the group.  The matriarch is in charge of finding water and food for the herd. 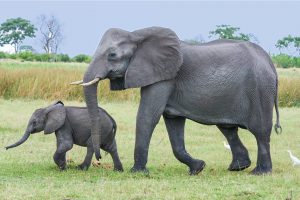 A mother elephant is pregnant with her baby for 22 months.

Calves will suck on its trunk just like some babies suck their fingers or thumbs.

A calf will drink up to 3 gallons of milk each day from the age of two years old until they are 10.

When a calf is born it will join the herd.  The members of the elephant herd will gather around the new calf to greet him or her.  They will make trumpet sounds and touch the calf with their trunk to show how happy they are for the birth of the baby.

It takes an elephant 10-15 years before becoming an adult. Adult male elephants will leave their families and find a new herd.  Female elephants stay with their mother’s herd.

All members of the herd will help take care of and protect the calf.

Calves love to play just like kids.  They will climb on each other and play by using their trunks.

Scientists discovered that elephants sing. They use an ultrasound rumble too low for humans to hear to keep the herd together and to find mates.

Elephants have been working with people for thousands of years.  They helped carry large objects and have been used for transportation and also used to scare enemies during invasions. Today some elephants are in shows and parades.  People work with elephants to teach them commands such as “come” and “bring.” Now elephants have been taught to paint too.

Elephants sleep about 2 hours per day.

Elephants need a lot of water for drinking, swimming, and staying clean.  They will walk hundreds of miles in search of a source of water.

Elephants like to swim and splash in the water.  Once they are finished swimming members of the herd will help each other throw dust all over themselves.  The dusk will act as sunblock and bug repellent.  Elephants also roll around in the mud to keep cool.

Elephants play an important role in the circle of life. They are “keystone species” which means their existence is important for other plants and animals to survive. As they roam through forests, they push down trees and clear paths.  The leaves of the fallen trees become food for the smaller animals.  The clear paths also help smaller animals pass through the forest.  Their large piles of poop or dung also serve as a food source for dung beetles.

An elephant’s heart beats much slower than a human’s heart.  It beats slower, but due to their size, it pumps harder.  Elephants have very strong hearts.

Another interesting fact about elephants is that they have higher blood pressure than humans.  This is because their blood vessels are much larger than human blood vessels.

The average lifespan for an elephant is 60-70 years.

two main threats to elephants are Ivory and loss of habitat. Lets first take a look at ivory.

Elephants were hunted and killed for their ivory tusks.  Their ivory tusks were used to make jewelry, collectibles, and even used to make piano keys.  In 1989 the Convention on International Trade in Endangered Species of the Wild Fauna and Flora but a ban on the ivory trade. The ivory trade was so big that around 100,000 elephants were being killed yearly in the 80s.

Unfortunately, today elephants are still sometimes killed for their ivory tusks.  These illegal killings are called poaching.  People are working to stop poaching to save these wonderful animals.

Loss of habitat is also a big threat to elephants.  A habitat is a place that you live in.  In countries that are home to elephants, the human population is growing.  This is causing the need for more land to build homes and farms to provide food to the people.  Elephants are left with nowhere to go.

Probably the most famous elephant in history is Dumbo.  Dumbo is the main character in this 1941 Disney movie.  Dumbo is a baby circus elephant.  He gets the name Dumbo because he was born with very large ears.  One day a group of kids was making fun of him which caused his mother to get very upset.  She gets locked up and taken away.  Dumbo’s ears accidentally cause an accident where other elephants get hurt.  Dumbo is then forced to dress up like a clown and perform dangerous tricks in the Circus.  One day he realizes that his ears allow him to do something very special, fly.  Dumbo amazes everyone watching the circus with his new talent.