I’m always looking for something fun to do with my now 20 month old daughter.  She loves animals so we decided to take a trip to the Long Island Game Farm. 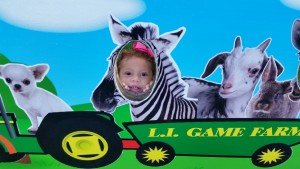 All the activities in the park you have to pay extra for except the show.

The pony ride is 3 tickets

So if you want to do everything in the park it adds up.

When we entered the park I bought all the tickets I needed and went on to feed the animals.  You can feed the giraffe, llamas, donkey, sheep and alpacas. They also have feeding tubes that let you slide the food down to feed the zebra, buffalo, ostrich and emu.  They also have a small variety of other animals such as camels, lemurs, monkeys, 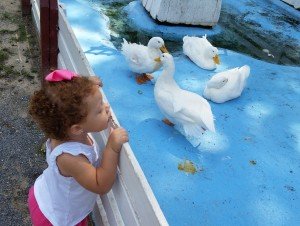 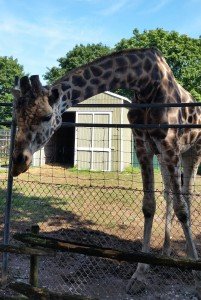 In a way I felt bad for some of the animals like the giraffe because their cages weren’t that big.

The nursery was Janelle’s favorite part by far.  It had baby goats that you can bottle feed.  Keep in mind that each bottle is $4 and they are small.  The milk is gone within 1-2 minutes.  We had to buy a couple.  Also keep in mind the goats are not shy they run right up to you, but they are harmless.  Janelle was startled at first but loved it and wanted to feed them again and again. 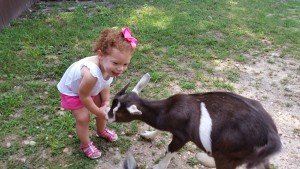 Janelle’s second favorite part.  The baby deer walk around and you can feed them.  They are more gentle and calmer than the goats.  The experience was a lot of fun.

We went on the mini train and the carousel.  In my opinion the rides need a little updating.  The carousel had no belts to strap my baby on and some of the paint was chipping off the horses.  The ride also moved a lot faster than most of the other carousels that I have been on.  The mini train was cute, but also needed to be updated.  There were four adults and some children on the train but it wouldn’t move so one adult had to get off.  When the ride started it still barely made it around the track.  The person controlling the ride had to push it by hand to make it move. A little disappointing to me but Janelle liked it.  She was too small for the bouncy house and we didn’t try the tea cups.

I did spend the $6 (3 tickets) for Janelle to go on the pony.  They walked around the small track three times.  The pony was very calm.  They wouldn’t let me walk around the track with Janelle, but they had two of the employees walk around with her.  I felt she was safe.   Janelle loved  it.

We saw the dog show which was cute.  They had a bunch of little dogs doing funny tricks.  They brought out a cowboy gun drawing monkey and a large dog.  Janelle really liked the show.

In my opinion the Long Island Game Farm is worth a visit.  You can spend a couple of hours there and do everything.  You don’t need to spend a full day.  It’s a good first park for a toddler.  It’s definitely geared toward children 8 and under. I wouldn’t bring older children as I see them getting bored very quickly. I do feel bad for some of the caged up animals.  I feel some of them need a bit more space to run around.  If I went back I would save my money and skip the mechanical rides unless they were updated.  The nursery, bambiland and the show are the best parts of the park.  If I had to rate my overall experience I would give it a 7 out of 10.