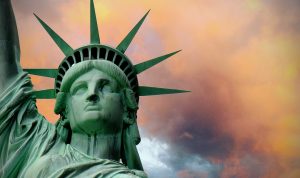 What is the Statue of Liberty?

For a very long time, people have been coming to America from other countries for the opportunity to build a better life for their families.  These people are call immigrants.

In the 1800s and early 1900s, many of these people arrived by sea.  Since 1886 the Statue of Liberty has been standing on an island in New York harbor to greet them.

To the people arriving in America in hopes of a better life, the Statue of Liberty symbolizes hope, escape from hardship, and freedom.

Where did the Statue of Liberty come from?

Before the constitution, before America was its own country, it was a set of 13 colonies.  The 13 colonies started with settlers from England who left that country for religious freedom.  The 13 colonies were still under British rule. The people of the colonies no longer wanted to be under British rule, they wanted their own country.  A war erupted.  The colonists fought the British in the war called the Revolutionary War.  The colonists had help from the French.  They won that war and America was born.  We celebrate that day with a holiday called the 4th of July.

Bartholdi knew that we would need help with such a large statue.  He reached out to a French engineer Alexandre Gustave Eiffel for help. Eiffel would later build the famous Eiffel Tower.

Bartholdi wanted the statue to look as if it was in motion.  He wanted it to reflect the struggle Americans went through to gain their freedom.  To do this he designed her to appear as if she was moving forward, and designed her to have one foot in front of the other.  The broken chains at the bottom of her feet symbolize freedom from oppression.

The statue was built out of steel.  The outside is made of layers of copper.  The Statue of Liberty was originally the same color as a penny.  It turned green over the years from a combination of the oxygen in the air and weathering.

In 1876 the completed arm and torch were brought to Philadelphia for the Centennial Exposition.  It received many visitors.  When it was over it was brought to New York City to be placed on display.  It was also visited by many visitors from New Yorkers.

Bartholdi continued working on the statue.  In March of 1885, the statue was finished and ready to be shipped to New York.

How was the Statue of Liberty transported to America?

Due to its large size, the statue could not be brought to New York in one piece. It was broken down into 300 pieces and shipped in more than 200 crates.

Once it was in New York it sat waiting for the pedestal to be completed. The pedestal was completed in April 1886.  It was then reassembled on the pedestal.

On October 28th, 1886 the Statue of Liberty has a dedication led by President Grover Cleveland and Frederic Bartholdi.  Thousands and thousands of people show up for the dedication.

The poem on the pedestal of the Statue of Liberty is called “The New Colossus.”  The poem was written by Emma Lazdrus in 1883.  Emma lived in New York City.  Freedom for all people was very important to her.  She lived in a time where women were not treated equally to men. Lazdrus was also Jewish American and believed that Jewish people like women were mistreated.  She spoke out about her feelings to many crowds.  When she was approached to write the poem to raise money to build the pedestal, she was honored. She wrote “The New Colossus,” which was a message about freedom for all.

See also  What is a Palindrome? List of Palindromes for Kids

“Not like the brazen giant of Greek fame,
With conquering limbs astride from land to lands
Here at our sea-washed, sunset gates shall stand
A mighty woman with a torch, who flame
Is the imprisoned lightning, and her name
Mother of Exiles. From her beacon-hand
Glows world-wide welcome; her mild eyes command
The air-bridged harbor that twin cities frame.
“Keep ancient lands your storied pomp!” Cries she
With silent lips. “Give me your tired, your poor,
Your huddled masses yearning to breathe free.
The wretched refuse of your teeming shore.
Send these, the homeless, tempest-tost to me,
I lift my lamp beside the golden door!”

Bartholdi also liked the French painting called France Enlightening the World by artist Ange-Louis Janet-Lange.  In the painting Liberty as a woman was holding up a torch in one hand.  He liked the message in the painting and named the statue Liberty Enlighting the World.

Now we know that the Statue of Liberty also known as Lady Liberty is a woman dressed in a long robe with a crown on top of her head.  She holds a tabula ansate (tablet) in her left arm that has the date July 4th, 1776 written in Roman Numerals July IV MDCCLXXVI.  July 4th, 1776 was the day America gained its independence. In her right hand, she holds up a torch.

She stands upon a pedestal.  She wears sandals and at the bottom of her feet are broken shackles.  The shackles represent freedom from oppression.  Fun Fact her shoe size is 879!

The torch Lady Liberty holds in her right hand represents the light showing the path to liberty.  As people came into America they would see the torch held high in the sky.  The torch’s flame was made of copper.  In 1986 it was replaced with a 24-carat gold-plated flame.

Where is the Statue of Liberty Located?

Can you Visit the Statue of Liberty?

The Statue has been closed to visitors for repairs many times throughout history.  In September 2001 the statue was closed to all visitors due to the city’s terror attacks.  The museum and pedestal reopened in 2004 and in 2009 the statue reopened.

Today, you can purchase tickets online to visit the Statue of Liberty.  An adult ticket to climb to the crown and take the ferry from New York is $22 a child’s ticket (4-12) is $12.

Approxmeitly 4 million people visit the Statue of Liberty every year.

From the foundation to the top the Statue of Liberty is 305 ft and 1 inch tall.

Her nose is 4 ft and 6 inches long

The arm holding the torch is 42 ft long.

Her index finger is 8ft long.

The waist is 35 feet round

The width of the head from ear to ear is 10 ft.

If you wanted to climb to the top of the Statue of Liberty, you would have to walk up 354 steps.

IN 1984 the Statue of Liberty was designated a UNESCO World Heritage Site.  UNESCO stands for United Nations Educational, Scientific and Cultural Organization.

She moves! When there are strong winds the statue can sway 3 inches, her torch can sway 5 inches.

The Statue of Liberty gets struck by lightening over 600 times a year.