Hey Kids! Do you want to learn all about America’s national bird?  Eagles are large birds with distinct features.  To learn more about our national bird check out these interesting bald eagle facts for kids! 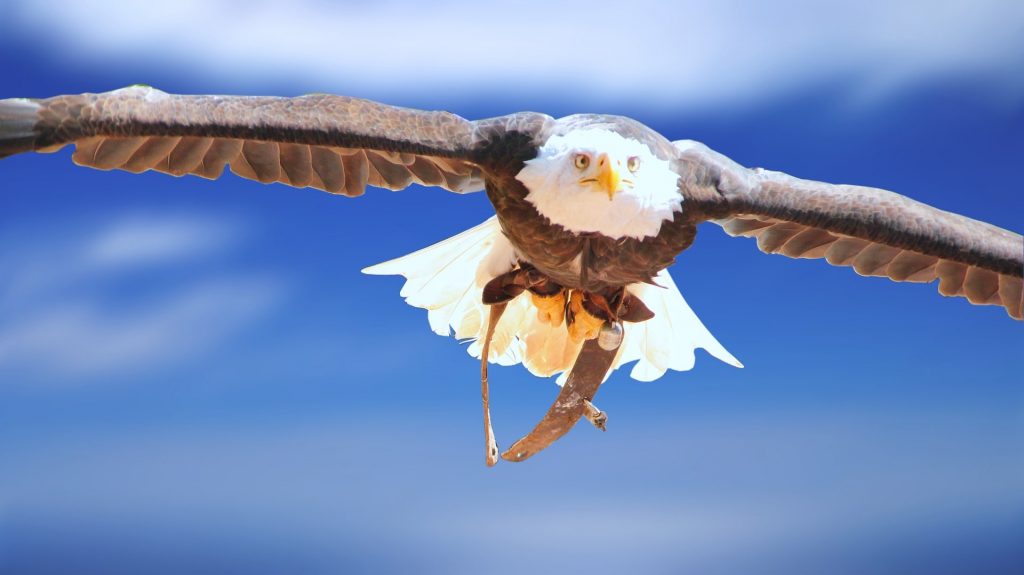 What is a Bald Eagle?

Scientific name: Haliaeetus Ieucocephalus.  They are bird species. Bald Eagles are the national bird of the United States.

Where do Bald Eagles Live?

They live in the forest near large bodies of water.

What do Bald Eagles Eat?

Bald Eagles are birds of prey meaning they hunt for food.

They are carnivores meaning they eat meat.

Females are slightly bigger than males.

Their wingspan can be 7  feet wide.

A Bald Eagle isn’t bald at all.  They are called bald because of their whiteheads.

They can fly up to 40 miles per hour!

During mating season September-April male and female Bald Eagles will work together to build large nests with sticks. Their nests can be 8 feet wide.

During courtship, Bald Eagles perform cartwheels in the sky.  They hook their talons (claws) and spin down from the sky towards the ground.  They let go of each other before hitting the ground and then soar back up into the sky.

When a Bald Eagle finds a mate they stay together until one dies then they find a new mate.

A Baby Bald Eagle is called an eaglet.

They are light brown and fluffy when they are born.  They do not get whiteheads and tails until they are 4 -5 years old.

Bald Eagles were put on the endangered species list in 1967.

DDT pesticides and being hunted by humans were the main reasons that Bald Eagle populations were declining.

Due to conservation efforts, Bald Eagles were taken off the endangered species list in 2007.

Today there are around 70,000 Bald Eagles living in the wild.