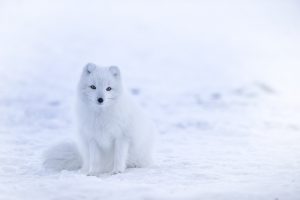 What is an Arctic Fox?

An Arctic Fox is a mammal. They are part of the canid family like wolves, other species of fox, and dogs.

An Arctic Fox is usually between 18-26 inches long with a 13-inch tail sometimes called a brush.

They weigh between 6 1/2-21 pounds. Females are slightly smaller than males.

An Arctic Fox has thick fur all over their body, even on the bottom of their paws.

They use their thick bushy tail to wrap around themselves to keep warm.

Where does Arctic Fox live?

Arctic Fox lives in the most northern parts of the world, where it is cold most of the time.  They live in places such as  Alaska, Canada, Greenland, Russia, Norway, Scandinavia, and Iceland.

Here is an interesting fact about Arctic Fox:  Did you know they are Iceland’s only native land mammal.  That means that there are no other land mammals that originate in Iceland.

An Arctic Fox average lifespan in the wild is 3-6 years.  On average they live 14 years in captivity.  Captivity is when an animal is no longer living in their natural habitat.

What is an Arctic Fox Habitat?

Arctic Fox lives in tundra habitats. Tundra is a vast, flat land with no trees and is mostly frozen.

Arctic Fox lives in burrows. A burrow is a hole or tunnel dug by a small animal.

What does Arctic Fox Eat?

Arctic Fox are omnivores meaning they eat plants and meat. Since plants are scarce in tundras, Arctic Fox mostly eats lemmings, voles, squirrels, small birds, eggs, fish, and seal pups.  They will also eat berries when they are available.

How does Arctic Fox Find Food?

Sometimes to get food an Arctic Fox will follow behind a polar bear and eat their scraps. Arctic Fox has an excellent sense of smell and hearing.

When they search for food they listen for their prey beneath the snow.

Their hearing is so good that they can locate the exact position of their prey under the snow.

When they locate their prey they pounce through the snow and grab their prey from under the snow.

When an Arctic Fox finds a mate they usually stay with each other for life.

Mates are often playful with each other.

A female Arctic Fox usually gives birth to 6-8 baby Arctic Fox called pups. Sometimes they give birth to larger litters such as 13-16 pups

Both the mother and father Arctic Fox stay together to raise the babies.

Did you learn a lot of interesting Arctic Fox facts for kids?  Do you want to learn more animal facts?  Click Here to read more amazing animal facts just for kids!