How to Plant the Perfect Nightmare Before Christmas Party for Kids 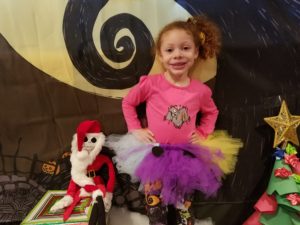 So, my daughter Janelle was turning 4 and she really wanted a Halloween Christmas birthday party.  She was talking about that theme for over a month. Her birthday is in the beginning of December.  After thinking about how to go about planning this Halloween Christmas birthday party, I remembered the movie Nightmare Before Christmas and thought that it would be a great fit.  We watched the movie together and she became an instant fan, so much in fact that she wanted me to call her Sally.  This is when the planning began.  Now, The  Nightmare Before Christmas is not a popular birthday theme among toddlers. They don’t have decorations, down the party aisle at Party City, so I knew I had to get creative. We talked about what she wanted to have at her party and we made a list:

Have a photo booth with Jack and Sally

Have Christmas and Halloween decorations

Play the song Thriller at the party

She was very precise on what she wanted at her party.   Now that I had the list, I could start the shopping.

OK, now time to get creative.  Since we started talking about this in mid-October.  The gingerbread houses would be the first thing to work on.  I thought how about Halloween/Christmas gingerbread houses.  I waited until the day after Halloween and hit the store to purchase the left-over Halloween gingerbread houses.  I saw them at Wal-Mart, A.C Moore and Party City.  It turned out that they were the cheapest at Party City.  They cost me only $2.75 each.  I needed 12, they had 9 in the store and I was able to purchase the rest on-line.  So, I had the Halloween houses and I wanted the kids to decorate them with Christmas candies.  I went to Wal-Mart and picked up gingerbread men, candy cane, mittens and Santa Claus little sugar cupcake toppers and white cookie frosting.  I also purchased Red and Green M&Ms, candy canes and used left over Smarties candies from Halloween. 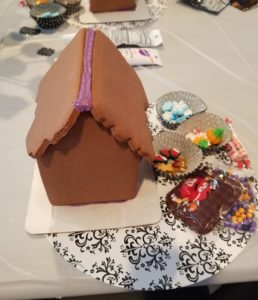 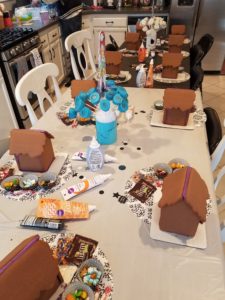 Shopping for a Halloween party right after Halloween is the best, everything is on sale.  I was able to get things for up to 80% off.  Even if you are not having a Halloween party, it is definitely worth it to shop after Halloween and save everything for next year.  I purchased some orange and black cookie icing and sugar black cat cupcake toppers for the gingerbread houses.  I also purchased some decorations and a lot of the glow bracelets and necklaces (they were .10 for 4).  I was able to get face paint on clearance.

At A.C Moore I purchased 2 cardboard pumpkins that I was going to paint as Jack and Sally. I used a black sharpie to draw Sally’s stitches and Jack’s face  They had an opening in the middle, I used this to place candy.  I was going to use the pumpkins to hold candy for trick-or-treating at the party. 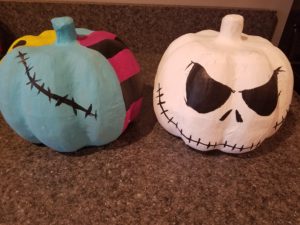 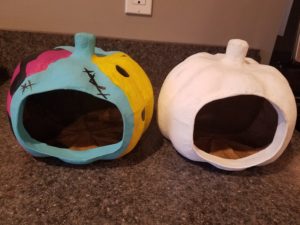 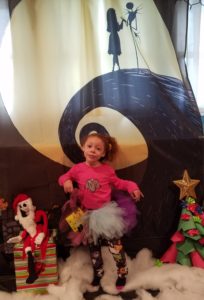 We set up face painting in the corner of the room.  The kids got to choose from Sally stiches, Jack’s face, pumpkin, Christmas tree or a black cat.

We played Freeze dance and did the limbo (I purchased a limbo stick at Party City).  We created a You Tube play list that included songs from the movie plus thriller (my daughter loves Michael Jackson’s Thriller) and some Christmas music. The kids got to trick-or-treat from the Jack and Sally pumpkins after each game. 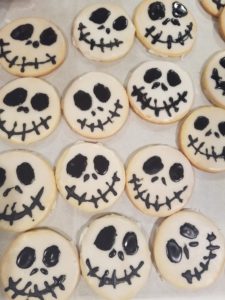 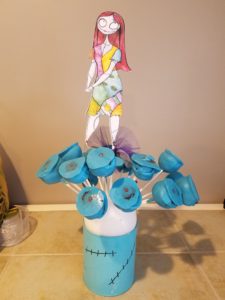 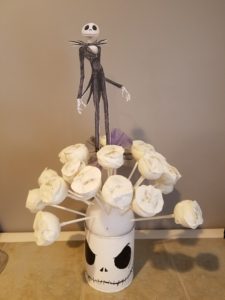 I ordered a Jack and Sally cake.  I used the zero cake topper to put on the cake. 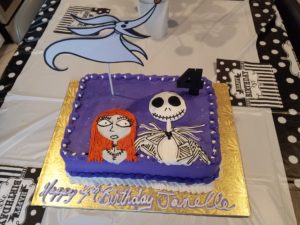 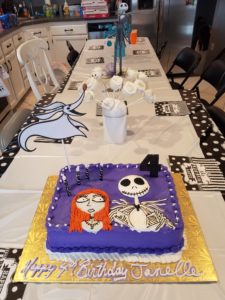 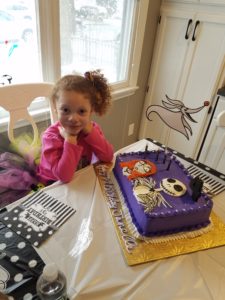 To make Zero the dog I bought a large Styrofoam ball for him head and a cone shaped piece for his nose.  Using a hot glue gun, I glued them together.  I bought 2 yards of white cloth and wrapped it around the head and nose and secured it with a rubber band.  I hot glued a large googly eye on his head and a red pom-pom ball on the tip of his nose.  I used the extra cloth to make his ears.  I cut long ear shape pieces and sewed them to his head.  To hang Zero, I made slits on each end of the cloth where his legs would be and tied thread around it, I made more slits on the top of his head and on his ears.  I taped the thread to the ceiling to make him hang. 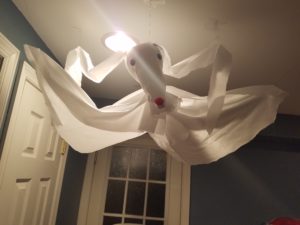 I purchased pumpkin goody bags, on clearance after Halloween.  I filled the bags with a Jack and Sally cake pop and a Jack cookie.  We also added Christmas themed bubbles, glow bracelet and necklace

See also  20 Activities for you and your Toddler Cream the sugar and butter, add the cream cheese mix well.  Add the egg yolk, vanilla then slowly add the flour.  Roll the dough into a ball.  Add a small amount of flour onto some parchment paper.  Roll dough out evenly, use circle cookie cutter.  Bake at 325 for 10-12 minutes or until the bottom of the cookie is a light, golden brown.  Let cookies cool

To make the icing

Place one cup of confectioners sugar into small mixing bowl.  Add two tablespoons of milk, mix until you get a shiny smooth texture. If it’s too thick add more milk, if it’s too runny add more sugar. Make again the same way but add black food coloring to make Jacks’s face.  Coat all of the cookies with the white icing.  When it is completely dry, place the black icing into a plastic piping bag, cut off the tip and use to draw on Jack’s face.  Wait at least one hour before stacking the cookies

Melting chocolate ( I used white for Jack and  teal for Sally)

Make the boxed cake mix according to the package.  Bake the cake.  Once the cake has cooled crumple it up into tiny pieces.  Place one cup of store bought caking icing into the crumbled up cake.  Using your hands mix the icing and the cake together. Make tiny ½ -1 inch balls out of the mixture.  Place them on a cookie try lined with parchment paper and add a lollipop stick to each ball, refrigerate for 1 hour.  After an hour melt colored chocolate with a double broiler or a chocolate melt.  Dip the balls into the chocolate and place back on cookie sheet place back into the refrigerator until the chocolate has hardened.  If you are in a warm humid climate, I would keep them in the re