Hey Kids!  Do you want to learn how fast a cheetah can run or where they live?  Check out these fun cheetah facts for kids. 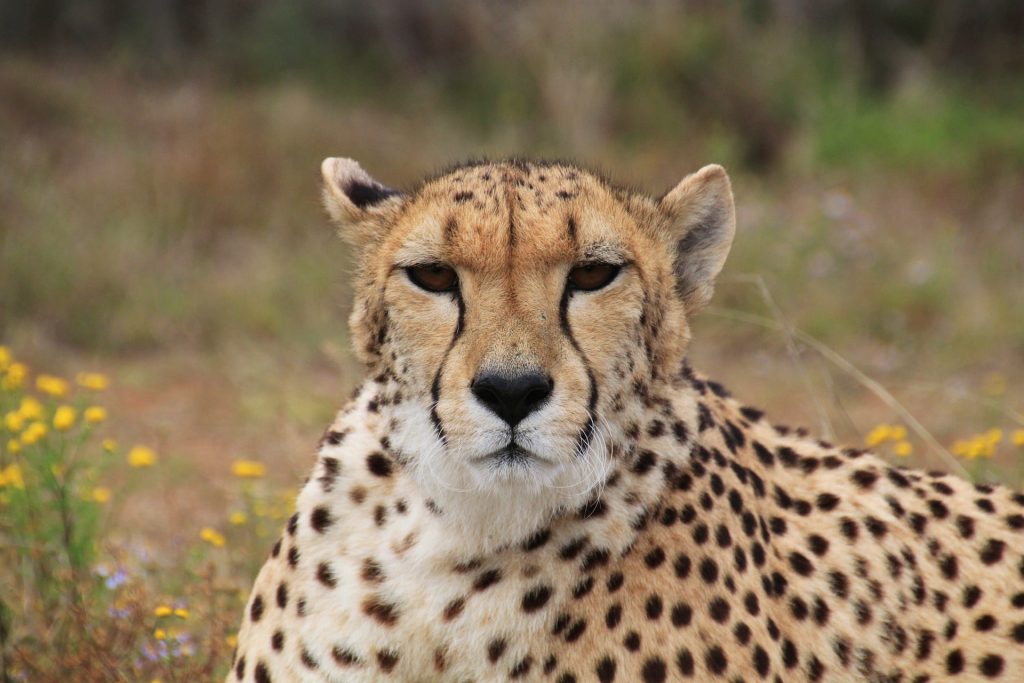 What is a Cheetah?

Cheetahs are mammals and part of the cat family. The scientific name is Acinonyx Jubatus- the name comes from the word Chita meaning spotted one.

Cheetahs are smaller than cats in the large cat family such as lions and tigers. Cheetahs weigh between 69-140 pounds and can be 4 feet long.

Cheetahs are built for speed. In a single stride, a cheetah can cover 20ft!

They have narrow, slender bodies with an orange-like coat with spots.

Cheetahs have long black lines that run from their eyes to their mouth called “tear lines” or “tear marks”. These tear lines help protect the cheetah’s eyes from the sun. A cheetah has between 2,000-3,000 spots! Their spots help them blend into their habitat.

Cheetahs are about 4 ft long. They have a flexible spine that helps them change direction easily while running.  Their lean body helps them run fast.

Cheetahs have large nostrils that let air enter their body faster which helps them breathe easily after running.  They also have large hearts and lungs so that they can get the oxygen they need for fast sprints.

They have long thin tails.  Their tail helps them balance when making sharp turns while running.

A cheetah’s claws do not retract (pulled in) like other cats.  Their claws are very strong and help grip the ground while running.

Cheetahs do not roar like lions or tigers. They let out a chirping noise when they feel threatened and they purr if they feel happy.

Cheetahs are sometimes mistaken for leopards but there are significant differences between the animals.

Leopards have a wider body than a cheetah.

Leopards do not have the “tear lines” or “tear marks” that cheetahs have.

Cheetahs have smaller heads than leopards.  Click here for more facts about leopards and snow leopards.

A habitat is a place or environment in which an animal lives.

Most cheetahs live in eastern and southwestern Africa.  Very few are left living in Iran.  You will also find many cheetahs living in captivity.  You can see them in many zoos across the country.

Cheetahs live in a variety of habitats including savannas, grasslands, and mountains.  Cheetahs need to live in places where there is a lot of space to run.

Cheetahs are considered a threatened species. It is believed that only  7,000-12,500 are left in the wild.

Cheetahs have become threatened due to loss of habitat and decreasing food sources.

Female cheetahs are pregnant for around three months.  Then they give birth to a litter of cubs.

Females usually give birth to one to three cubs, however up to nine can be born.  Cubs are born blind and totally dependent on their mother.  A cub’s eyes will open within 10 days of birth.  Shortly after they will start crawling.

A mother cheetah will care for her cubs in a den.  Mother cheetahs will often move her cubs around by carrying them in her mouth.

A cub has dark gray hair with longer hairs on their head and neck that resemble a mohawk to blend in with their habitat.   Their camouflage coats will protect them against predators such as lions. or hyenas.

When cubs are about 2 months old their baby hair starts to fall out and is replaced by the adult spotted coat.

Cubs are playful. They wrestle and chase each other around.

Mother cubs will start teaching their cubs how to hunt and to avoid predators.  Cubs will practice hunting with their brothers and sisters.

The mother cheetah will stay with her cubs for 18 months.  At 18 months, she feels confident that she has taught her cubs to hunt and survive on their own.   She will leave them and go off to live on her own.

Cheetahs are carnivores.  Carnivores are animals that eat meat.

Cheetahs are always looking for food.  They will often look for young animals or even injured animals to catch.  Because cheetahs have excellent eyesight, they can spot prey up to 3 miles away.

Cheetahs will hide in the tall grass to sneak up on their prey.  You may think that because cheetahs are so fast, hunting would be easy for them.  This is not the case.  Yes, cheetahs are extremely fast animals however they are fast for short distances.  Cheetahs are sprinters, they cannot maintain speed for a long time.

Once the cheetah is within about 100 feet from their prey, they will sprint at it.   Then use their front paw to reach out to the animal next they will use their dewclaw (a sharp claw on the inside of the front leg) to trip the animal and bite its throat.

After cheetahs catch their prey they will bring it to a shady hiding place so other animals don’t see it.  Cheetahs are usually too tired to eat after they catch their prey.  They will take a rest then go back to eat later.

Cheetahs do not like to fight.  They will give up their prey (food) if a larger more aggressive animal approaches them to avoid a fight.

Unfortunately, the cheetahs are endangered and even facing extinction.  A large problem for cheetahs is loss of habitat causing lack of food.  Due to populations expanding a lot of cheetah habitats are turning into farms.  When cheetahs don’t have food to eat, they will sometimes eat livestock on the farms.  The farmers do not like this and will often kill the cheetahs.

Another problem cheetahs face is predators.  Many lions eat cheetah cubs and often hyenas are stealing their food.

Poachers are also a threat to the cheetah.  A poacher is a person who hunts an animal illegally.   Even though it is illegal to kill cheetahs for their fur, poachers still kill cheetahs to make rugs and coats.

Cheetahs have the shortest lifespan of any large cat.  They only usually live 7-10 in the wild.  Because they don’t live long, females are producing enough babies to keep the population going.  Cheetahs reach 16 years old when living in captivity.

Cheetahs have been a beloved animal for thousands of years.  In Ancient Egypt, cheetahs were kept as pets.  They were often used to help with hunting.