These S’mores are a great summer snack.  I made them in our summer camp and it was a big hit.  They would also be great as a dessert at a BBQ or summer party.  Follow the step-by-step directions below to make your own S’mores on a stick.

Step 1: Roll out the refrigerated pie crust onto parchment paper.

Step 2: Using the pizza cutter cut the pie crust into 8 squares.  I was working with a big group of kids.  If you have a smaller amount of kids you can make the squares bigger.

Step 3: I called the kids up in groups of four so it would be easier to work with them,  I gave each child one square and told them go over the square with the rolling pin two times.  If you don’t have a rolling pin the kids can just push down on the square.  They just need to be flattened a little bit.

Step 4:  Break off the smaller bars of the Hershey’s chocolate bar and give one to each child.  Have them put one piece of chocolate on the square. If you are making bigger S’mores you can use more chocolate.

Step 5: Give each child a lollipop stick and have them press it into the bottom half of the square.  The chocolate should be right above the lollipop stick. 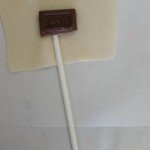 Step 6: Give each child one or two marshmallows and place them on top of the chocolate.

Step 7: Fold the stop part of the square over the bottom half and then fold the sides in.  Some of the kids just squeezed the pie crust together so it covered the stick.  It doesn’t look as nice but takes the same.

Step 8: Bake in the oven for 5 mins, flip them over and back for another 3-5 mins or until golden brown. Enjoy!