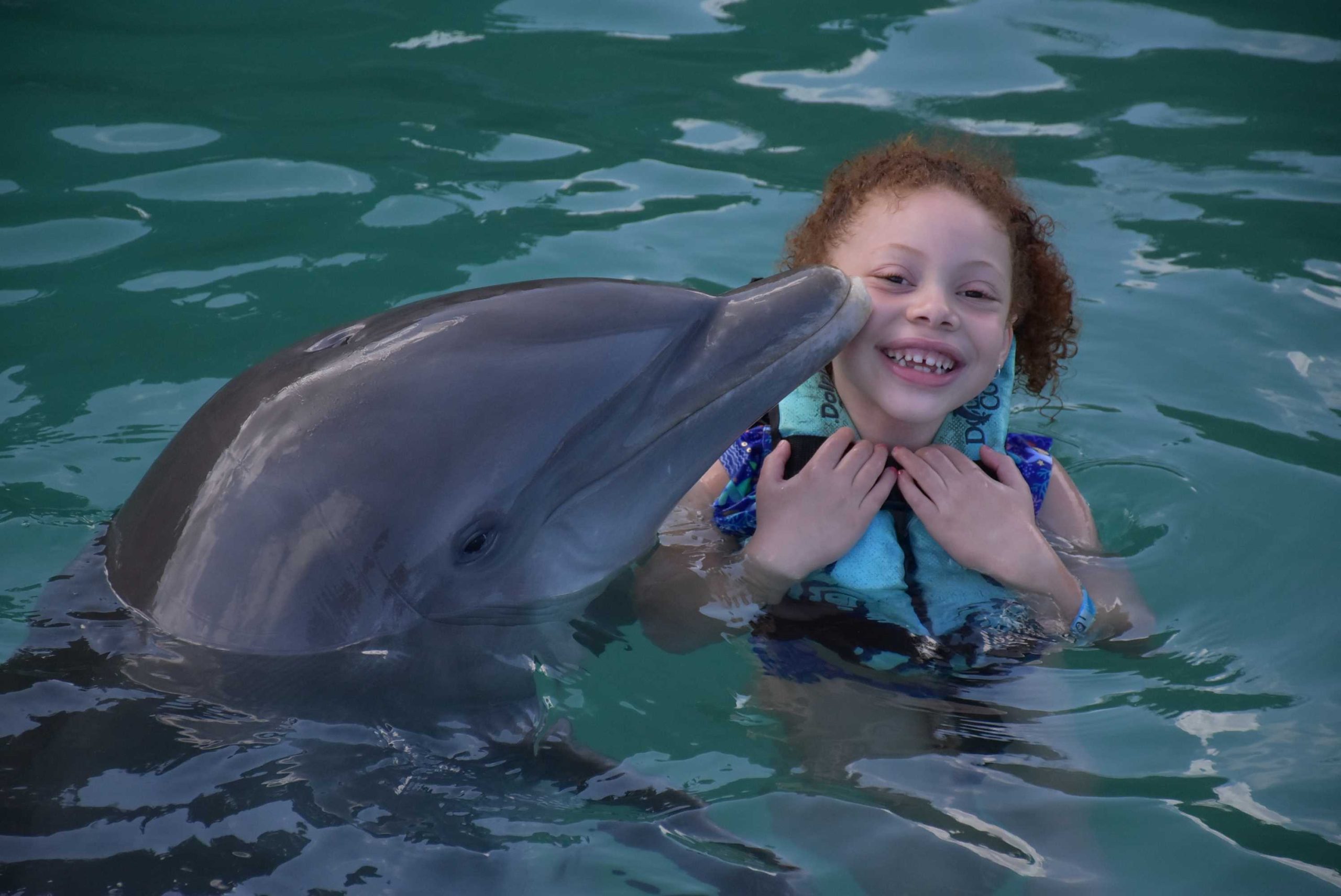 What is Dolphin Cove?

Dolphin Cove is a popular tourist attraction located in Ocho Rios Jamaica. It is a place where people can interact with marine animals including dolphins, stingrays, and sharks. They also have iguanas and a variety of species of birds that you can also interact with.

Dolphin Cove is located about a five-minute drive from the popular Ocho Rios cruise port. It is a great place to spend time while visiting the beautiful island.

My family and I were on a cruise that stopped in Ocho Rios Jamaica. When I found out that we were visiting Jamaica, I started doing research on excursions that my family would enjoy. My daughter aged 6 really wanted to swim with the dolphins. That was something I also wanted to do. My son aged 2 and their father I know would not enjoy the experience. Even though they didn’t want to participate, they wanted to come and watch. I didn’t want to pay the expensive price of the shore excursion for family members that were not going to participate so I decided to book through the Dolphin Cove website.

Booking through the website was easy. I did an online chat and was able to get a great offer. The original price to get into the park for people ages 3 and up was $69.00. They gave me the price of $70 to add the dolphin encounter. I jumped on it and paid $70 for the three of us. My son aged 2 was free but was still able to participate in the dolphin encounter. I loved this idea because if he decided that he wasn’t afraid, he would be able to join us.

Entrance into the park

On the online chat, the booking agents at Dolphin Cove that I could easily get there via taxi from the cruise port. I was a little nervous about this but the agent said that getting a taxi was easy and safe. I decided that a taxi was the way to go.

As soon as I got off the cruise ship in Jamaica, people were approaching us about getting into a taxi. It was a little overwhelming. There were a lot of people and it was very crowded. It was not like previous cruise ports I have been to. I saw someone with a dolphin cove shirt on and asked them the best way to get a taxi to the location. I was directed to a taxi. The taxi told me that it would be $14 a person with a total of $56 for the four of us. With no other option, we decided to take the taxi. I was still cheaper than paying the $100 per person to do the excursion.

After about 5 minutes we were at Dolphin Cove. I thought it was a little pricey for the distance. I was thinking about walking back to the cruise port however it didn’t look like a safe walk with small children.

Dolphin Cove was a beautiful park. The grounds are well kept and extremely clean. I didn’t see a piece of garbage anywhere in the park.

The areas where the animals were kept were also well maintained and clean. It looked like they took care of the animals and cared about their living environment.

Upon arriving at Dolphin Cove, we encountered a staff member who gave us a tour of the park. He was like of personal tour guide. When we walked in we immediately saw the dolphin habitat. We were the first people in the park for the day. No one was in the dolphin habitat. The dolphins were swimming around and doing flips in the air. My children and I were very impressed. We have never seen dolphins before and they entertaining to watch.

After watching the dolphins for a while, we walked over to another area where they had sharks, stingrays another dolphin habitat and baby dolphins. It was really exciting to walk around and get an up-close look at the animals.

My daughter age 6 and I decided to do the dolphin encounter. My son aged 2 and their dad decided to sit out and watch.

You do the encounter in a small group. Once everyone in the group was fitted for their life jacket, they bought over to the stairs to enter the dolphin habitat. 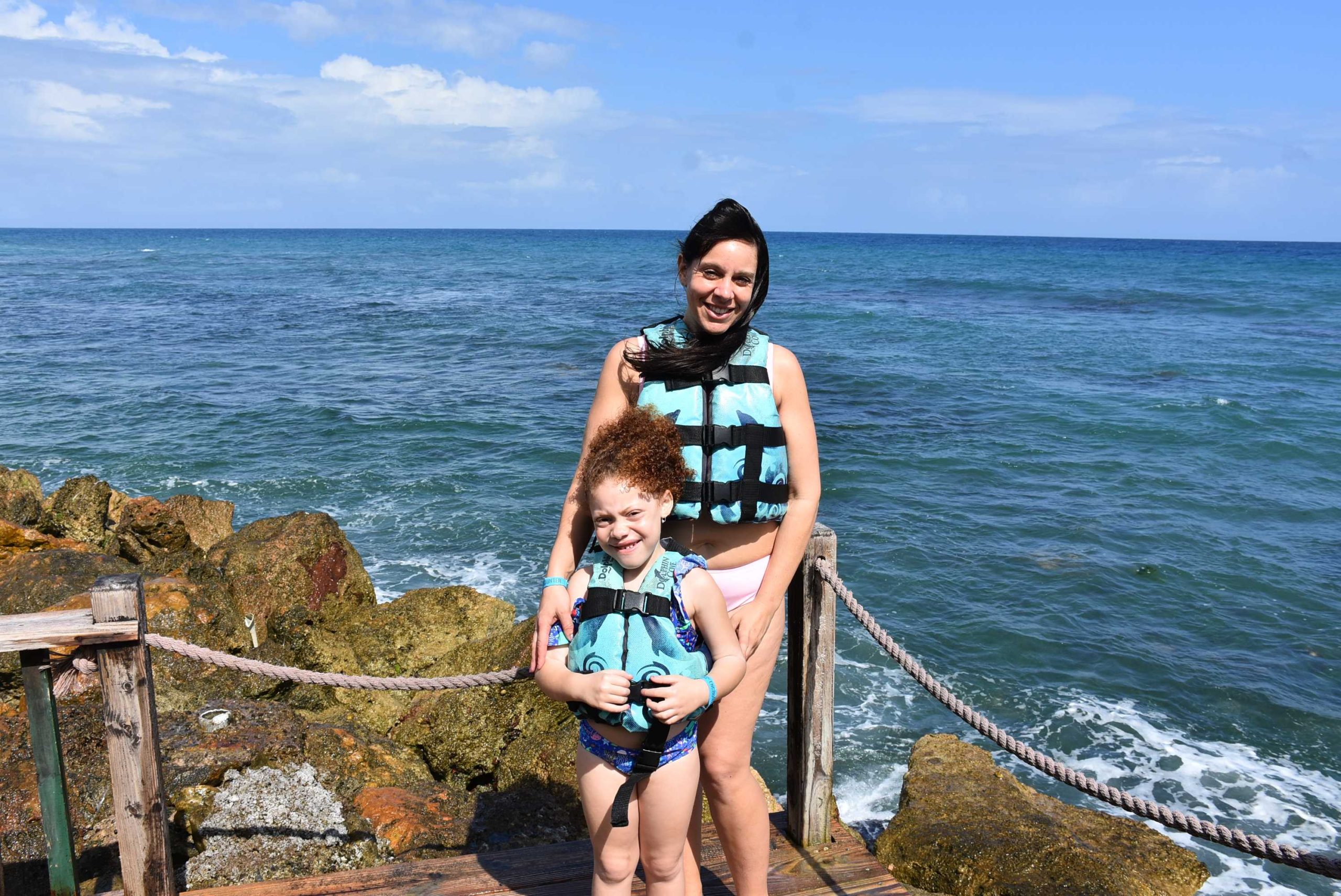 You walk down the stairs and stand on a platform in the water. I am 5’5 and while standing on the platform the water was just above my waist. The platform was a bit slippery, once I gained my balance it was OK. 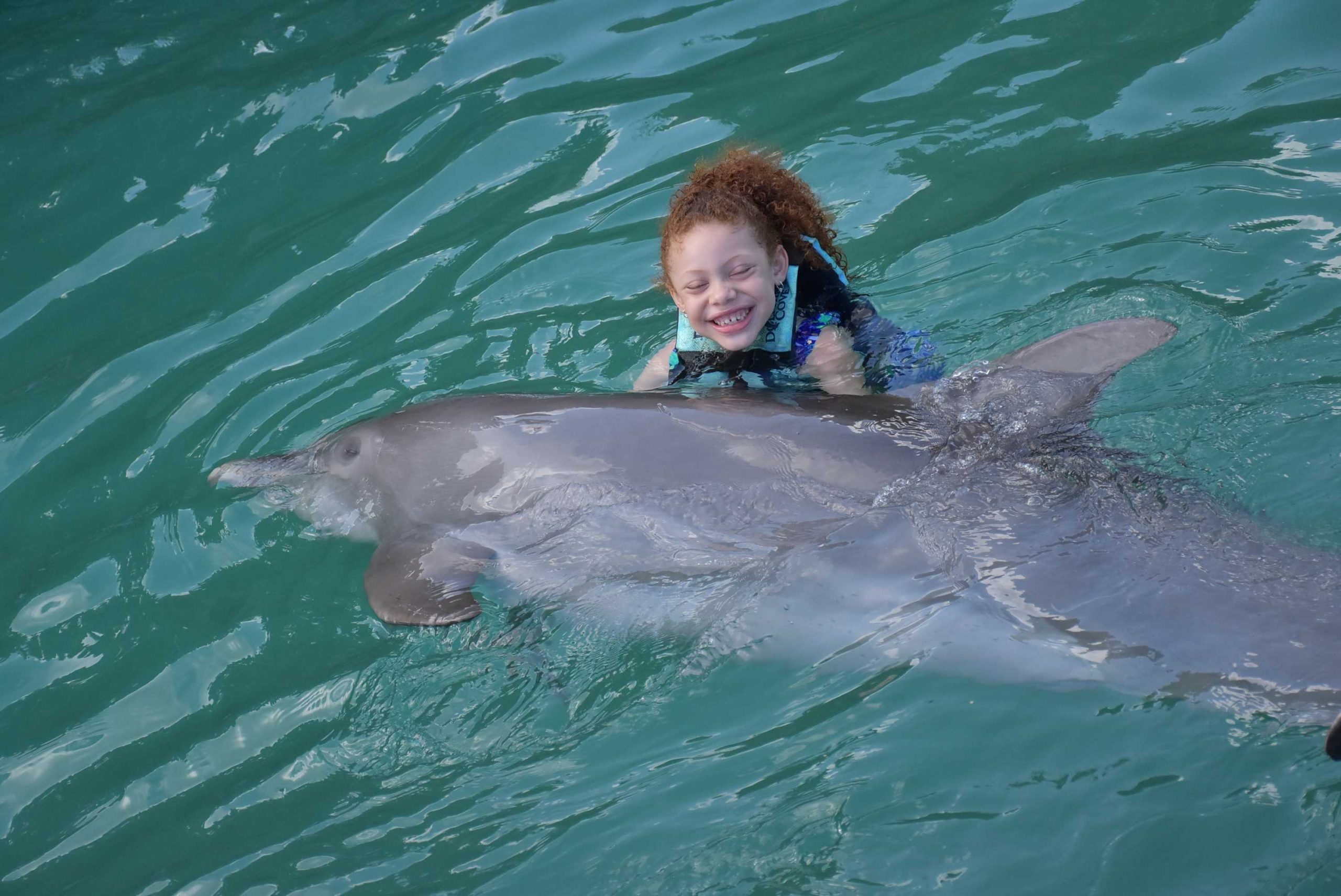 Dolphin Cove does not allow you to bring phones or cameras into the dolphin habitat. They do have photographers that take your picture during the encounter.

When it was your turn to have the dolphin encounter you had to swim out from the platform. Toni would come up to you and kiss you on the cheek. Then you had the opportunity to kiss Toni on the cheek. You then hold your arms out and was able to hold Toni. After holding Toni you have the opportunity to hold Toni’s fins and dance with her. It was really a lot of fun. When your turn was over, you swam back to the platform. Some people in our group were unable to swim or didn’t want to go off the platform. That was fine, Toni would just come up to you at the platform. Remember the photographer takes your picture during the entire encounter. 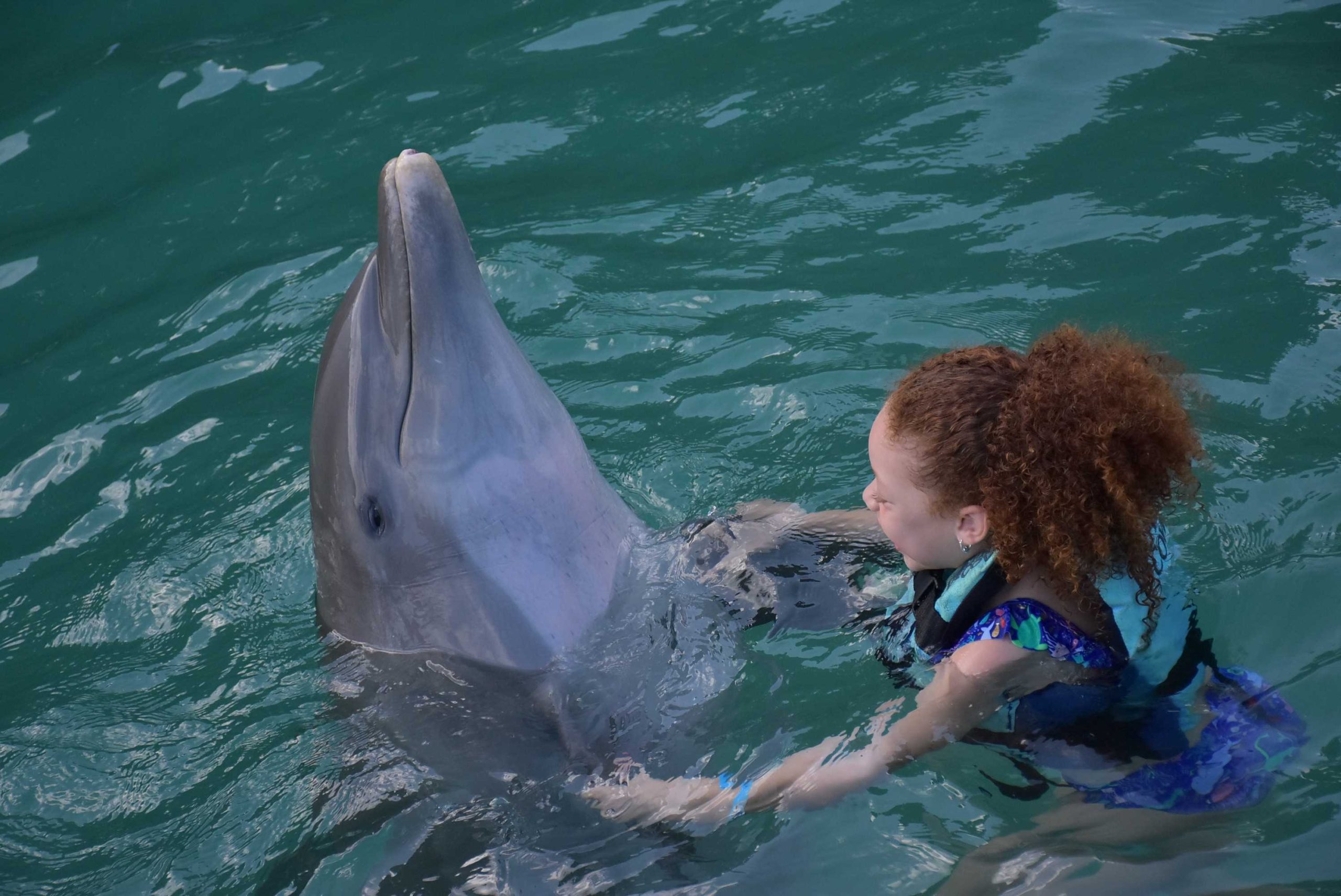 After everyone had a turn with Toni. Toni did some flips and tricks. We were able to touch Toni again as we learned more about dolphins and dolphin habitat. I was told the encounter would last 30 minutes however it was just about an hour. It was a very nice experience.

Whether you swam with the dolphins or had a dolphin encounter you are going to want to cherish the memory forever and what better way to do that then to have a photograph of you with your dolphin. Again, at Dolphin Cove, you are not able to bring your phone or camera to take pictures so you must purchase them at the gift shop. I decided to get the digital download of my daughter’s pictures. It cost $70 for all of her pictures.

To get the pictures they set you up at a photo kiosk, then you have to pick the photos you want, download an app, pay for the pictures, then they give you a code to put in the phone to download the pictures. It was a little bit of a process but I was happy I did it. The pictures came out great. When we go home from our trip, I printed out some so she could show her class.

From the website and reading reviews, I thought the nature walk would be a long trail. I was a little disappointed because I thought I was going to take a nice long walk. It was a short walk to the iguana habitat and the macaws. My daughter got to hold the iguana and we took a family picture holding the macaws.

My children really enjoyed the animals. I didn’t see any snakes as advertised on the website. They also had a second bird encounter.

If I had to describe the beach at Discovery Cove I would say it’s small but pretty. The beach a Dolphin Cove is very small. They have a small area with some sand and beach chairs. They also have a kayak available for use free of charge. Though small the beach area was nice. It was rocky, I recommend water shoes. My son and daughter enjoyed looking for beach treasures and playing in the water.

After the dolphin encounter, my daughter was hungry. We decided to eat at the restaurant. It was outside facing the Caribbean Sea. The menu offered basic items such as burgers and chicken nuggets. They really didn’t offer authentic Jamaican dishes, but the food was OK.

Dolphin Cove has two gift shops in the park. The souvenirs were reasonably priced for a tourist attraction. My children each got a stuffed dolphin. I tried a couple of different flavor rums and bought a mango rum and a Jamaican rum punch, both tasted fantastic.

The staff at Dolphin Cove were very nice and wanted to make sure you had a good time. Throughout the day, staff would approach us to ask if we were having a good time or if we needed anything.

Though the staff was very nice and friendly, they also worked for tips. When visiting Dolphin Cove, make sure you bring a lot of singles and small bills for tipping.

Transportation was an issue. It wasn’t hard to get the taxi but It was very expensive. Remember to get there by taxi, $56 for 4 people, 5 minute drive. On the way back, it cost us $20. Not sure why there was such a big price difference. If I had to go again, I might go through the ship excursion.

Tips- People in Jamaica expect tips, bring a lot of singles and small bills. Everyone in the park was very nice and wanted to show you a good time however they expected something for it. I didn’t mind though, I know the island depends a lot on tourism.