Do your children love Play-Doh?  Are you in the Fall spirit?  If, so you must make this quick and easy apple, cinnamon Play-Doh!  This Fall Play-Doh is made with easy ingredients that many people already have at home.  It only takes a couple of mins to make and will be hours of fun for your kiddos!  It smells super great, it had my whole house smelling like Fall. 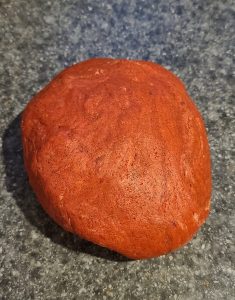 My children ages 2 and 6 enjoyed making this Apple Cinnamon Play-Doh.  I let them pour in the simple ingredients.  I pre-measured the ingredients then let them take turns pouring each one into the bowl. 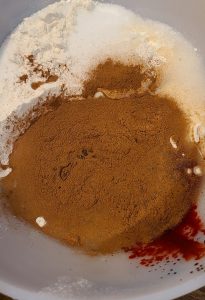 This is what it looked like when all the ingredients were poured into the bowl. I added food coloring.  I didn’t want to take the chance of them spilling that all over my kitchen table. They did a pretty good job.  There wasn’t much that spilled on the table!

After all the ingredients were in the bowl, I let them take turns mixing the ingredients together.  They came together easily.  It didn’t take much mixing at all.  Did I mention that it smells amazing?  It had my entire house smelling like apples and cinnamon, yum!

After the mixing was complete, I divided the Play-Doh in half and let the children play.  I also played with some.  The Apply Cinnamon Play-Doh was very soft.  It worked great with all the Play-Doh accessories.  We also used cookie cutters.  My six-year-old struggled with the cookie cutters at first because the Play-Doh was super soft, but then she got the hang of it. 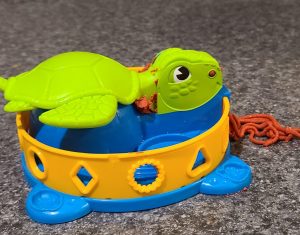 This is a great craft to do at home with your children but can also be done in a class or group setting.  I would split the recipe in half.  Just measure out the ingredients and put them into individual cups.  Give each child cups with the ingredients in them and a mixing bowl.  As a group, the children will add the ingredients one at a time, then have the children play with their own Play-Doh. 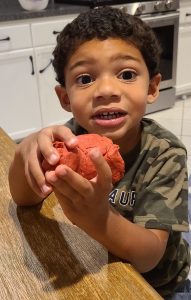 How to Make Apple Cinnamon Play-Doh

Red Food Coloring – Add as much or as little as you would like.  The more you use the more likely it will leave a red residue on your hands.  After my children played with the Play-Doh their hands were a little red, but it washed right off.

To make the Apple Cinnamon Play-Doh start off by adding red food coloring to the 8oz of apple juice.  Second, combine all the dry ingredients.  Next, add in your apple juice. Last, mix all the ingredients together. My children did not follow the instructions and just poured everything into the bowl.  It still came out the same.  They had a blast.

Playing with the Apple Cinnamon Play-Doh

My children ages 6 and 2 had so much fun playing with the Apple Cinnamon Play-Doh.  They rolled it out, make shapes out of cookie cutters, and used the regular Play-Doh accessories.  The Play-Doh did not stain or stick to my table.  If you are worried about that, you can have the children play on a plastic placemat or craft activity mat.

See also  How to Make Easy Halloween Crafts for Kids 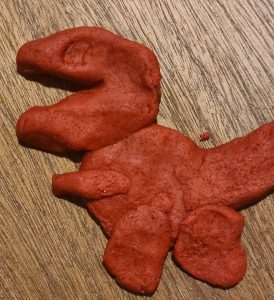 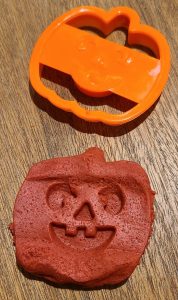 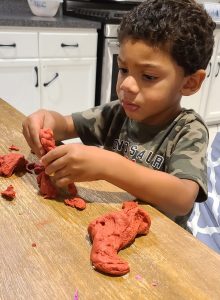 Some people asked if the Apple Cinnamon Play-Doh was edible.  I guess technically all the ingredients used can be consumed, however, I would not recommend it.  There is a lot of salt added and it would taste good.    It is safe for toddlers if accidentally eaten.

After my kids were finished playing, we stored ours in a Ziploc bag.  It’s been a couple of days and it is still nice and soft and fun to play with.  We did try an experiment and used a cookie cutter to make a pumpkin shape.  We left it out to see if it would get hard.  After two days it is still not hard, but it is leaving the house smelling like Fall.

This activity was so much fun!  We plan on making it our new Fall tradition.